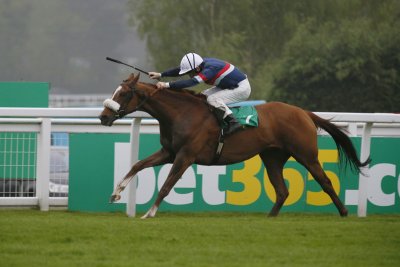 Tullius - with KVT colours - wins the 2014 Group 2 Bet365 MileIf you are interested in racing, or even obsessed by it, and have always wanted to feel the thrills of ownership, joining a syndicate and buying a share in a horse is a first step.  Racing manager Sam Hoskins can certainly find you a share in one of the horses Kennet Valley Thoroughbreds (KVT.)

The KVT syndicate was started in 1988 by Nick Robinson - the man who helped get Robert Sangster into racing.  He suggested Sangster put a bet on Chalk Stream - a good Wiltshire name.  The horse did not win, but Sangster bought the horse as a gift for his fiancée.

Nick Robinson, now aged 77, was a pioneer of horseracing syndicates.  He was the publisher of the racing industry's Pacemaker magazine, which has now merged with Thoroughbred Owner and Breeder magazine.

Last year Robinson handed over management of KVT to a very much younger man - 28-year-old Sam Hoskins.  And he has now retired as KVT's Chairman - but still owns shares on some of KVT's horses.  Over the years KVT have sent out 122 winners and earned £2.8million in prize money.

Sam Hoskins at Newbury Sam Hoskins became interested in racing when his grandmother owned half of Errant Knight - a chestnut gelding trained by Martin Pipe who won sixteen races in the early 1990s. Sam got a great thrill from leading him in after races.

When he was seventeen - and still at school - he found out how to lay off his bets.  Then one day he forgot to lay off what was for him then a huge gamble - a £20 bet on the Nicky Henderson trained hurdler Geos.  It was the 2004 running of Newbury's Tote Gold Trophy Hurdle.  Faced with a field of 25 runners, Sam spent an agonising time waiting to lose his £20.  But the horse won and he pocketed £400 - that hooked him on racing.

Sam Hoskins trained on the Irish National Stud course - a course that covers many aspects of racing: "I lost a stone and a half mucking out!"  He then worked at studs in Kentucky and Cambridge, New Zealand where there is a mix of breeders, trainers, polo, eventers and racing: "I learnt the ropes there."

Back in Britain, he spent two and a half fulfilling years working for the Niarchos family - leading racehorse owners and breeders.

With that £400 win behind him, and a head for the niceties of breeding and form, he went on to win racing's lottery prize: he landed the Racing Post Ten-to-Follow Competition for the 2008-2009 jump season - a cool £440,000 win.  It allowed him to set himself up in business.

In 2012 he started the Hot to Trot Racing Club with Luke Lillingston. This is more a racing members club than a syndicate. They lease horses rather than buying them and so can provide a much more affordable way into racehorse 'ownership'. Hot to Trot currently has seven horses. 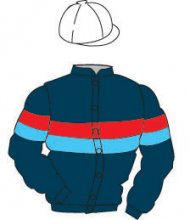 The KVT silks Sam and Piers Winkworth are continuing KVT's regime of selling shares in single, named horses - 16 shares for each horse at around £7,000 per share.  With trainers' fees at between £50 and £60 per day, it is an expensive business.  But winnings and any money left over at the end of the season is returned to shareholders.

The syndicate has horses with trainers Andrew Balding, Charlie Hills, Ralph Beckett and Richard Hannon.  It is mainly involved with young horses - buying at the yearling sales in the £30-50,000 range.  This season they have four two year olds - three colts and a filly.

They have one 'old timer' - the much cherished syndicate star Tullius.  He is an Irish bred seven year-old chestnut gelding trained by Andrew Balding at Kingsclere.   On 25 April 2014, Tullius, with Jimmy Fortune aboard, ran on strongly to win Sandown's Group Two BET365 Mile by three and three-quarter lengths.  That win was worth £53,800 to KVT.

And last month he won the Betway Doncaster Mile Stakes by half a length.  But Jimmy Fortune could only bring him in fourth of a field of five in last Friday's (April 24) BET365 Gordon Richards Stakes at Sandown - like humans, horses have to have 'off-days'.

Sam takes a realistic view of Tullius: "He's not the most straightforward horse. And we are already thinking ahead about ways to give him a good retirement after racing."

KVT horses earned their owners £238,477 in 2014:  "Last year," Sam told Marlborough News Online, "was our most successful season for many years, mainly due to the fantastic year had by our star Tullius."

KVT's other horses for this flat season are: Bishop's Leap, Frenchman, Magical Memory, Match my Fire, Maxwell, Signal Hill and Stroke of Midnight.

Some people may find that joining a syndicate not only brings the thrill of winning, but also some doubts when something goes wrong with your horse.  But the good days in the winner's enclosure always make up for any set backs.