Training on the Manton all weather gallop with Martin Dwyer aboard (29 February 2020)Back at the beginning of March, before the equestrian world found itself behind closed doors, then in lockdown and now once again behind closed doors, we reported on a locally trained hope for the new Flat season.  Hopes were high for a new recruit to Brian Meehan's Manton yard.

The two-year-old bay gelding - now named Tanfantic - is owned by the Brian Meehan Racing Club syndicate, and it was a real shame its members could not have been at Windsor Racecourse on Wednesday evening (June 24) to see their horse win his first race.

The Racing Post analysis of the race noted that Tanfantic was "Reluctant to load, pulled hard, midfield, ridden and headway 2f out, disputed lead 1f out, led inside final 110yds, ran on towards finish, cosily" - winning by a length. The favourite, Ehrmann, came home in seventh place after weakening in the final furlong.

Martin Dwyer went on to make it a double for Windsor's evening meeting behind closed doors, bringing Lorna Cole home to win the five furlong race by a neck.  Dwyer has been having a successful series of rides - with his win in Royal Ascot's King Edward VII Stakes aboard Pyledriver (June 16) catching the headlines.

Brian Meehan has also been having a good series of wins.  He trains the French bred four year-old Palavecino who has won twice this month - both at Kempton (June 12 and 21) and both with Dwyer aboard.

Watch out for Tanfantic's next appearance. 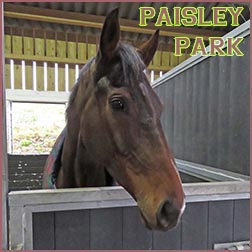