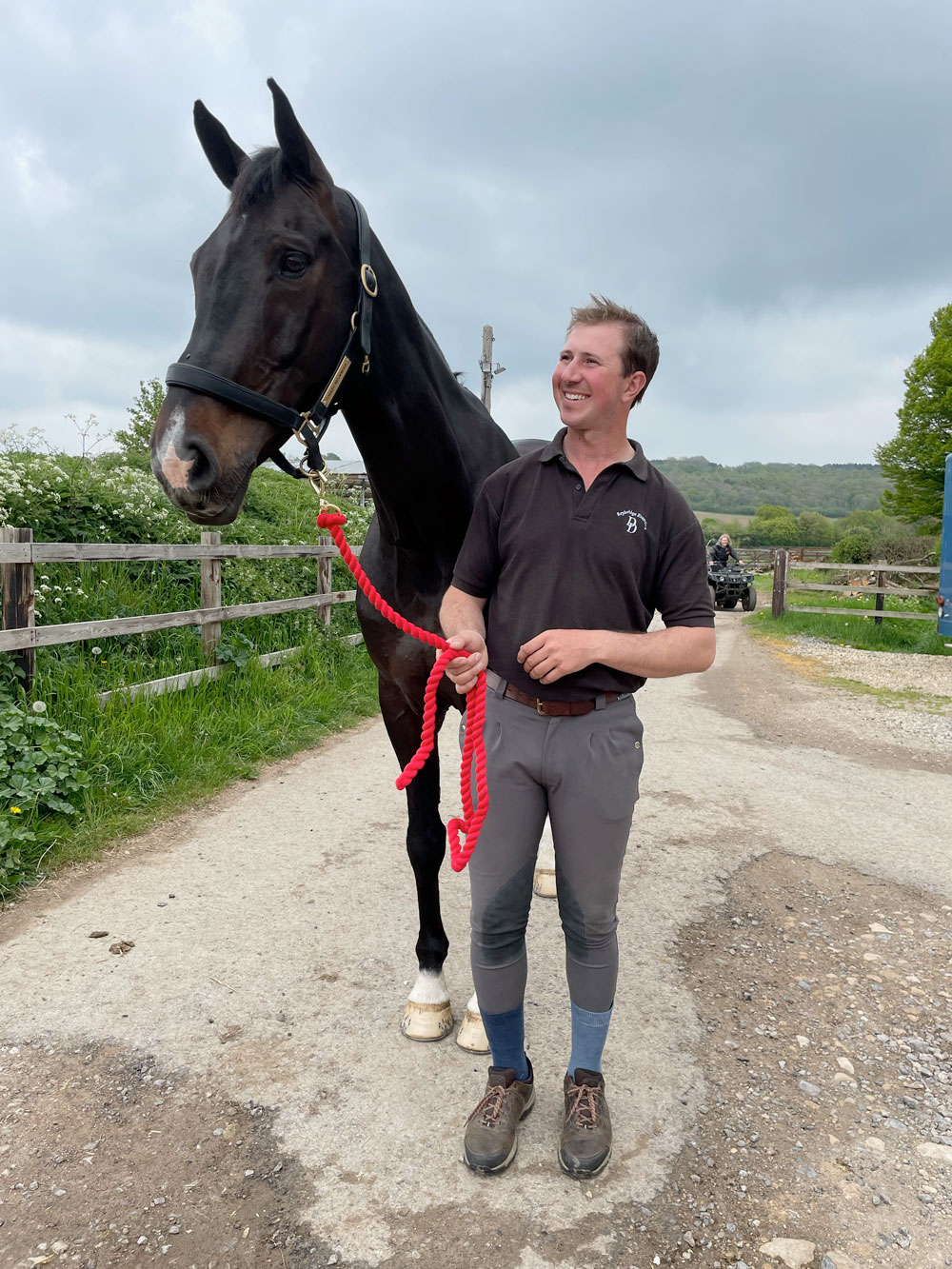 David Doel with GalileoDavid Doel is going to his first Badminton with a plan.   He wants to make the British team.
His CV says it all, and this charmingly modest, mild-mannered farmer’s son sees Badminton as the next logical step in his hopes for team glory with the GB equestrian team.
“I need consistency with results,” he explained.   “I’m aiming for the top 15 at Badminton now. That should be realistic.  And then a year at the top level with Galileo should give us the right sort of exposure.”
He is currently ranked at 16 in the British Eventing ratings and is steadily creeping his way up.
He’ll be taking his impressive 17.2 Galileo, owned by Gillian Jonas, to his first  Badminton..
“Galileo was sent to me to sell originally, and I didn’t actually really like him to begin with,” said David.
“He was this slightly gawky looking thing, but he just kept producing the results.”
“But I love him now. And yes - he definitely sees himself as a star.”
David’s Reybridge Eventing yard is on his parent’s farm, nestled in the hills between Chippenham and Calne.
The stables are in converted cattle sheds.
It’s a real family affair at the the farm which has been in David’s family for generations.
Dad Tony has a 350 head of dairy herd - producing milk for Cadbury’s chocolate -  and a sideline in ice cream from his Lacock Dairy Ice cream - found on sale at Marlborough’s Food Gallery.
“I have a job trying to sell ice cream for him in between all the riding!’ said David.  “I don’t have to wear any ice cream branded stuff though, thankfully!”
David also earns a bit of cash driving HGV lorries over the winter.
“It’s something a bit different, and you can get stuck on the yard sometimes, so it’s good to do other things too.”
As David heads to Badminton, he has the solid reinforcement of Nick Turner for jumping training and Adam Kemp for flatwork training.
“They have been instrumental in putting together processes and plans to make sure the horses get into shape for Badminton.”
David’s mum Maggie has been instrumental in David’s steady rise.  He is still just 29 years old, but his equestrian CV is impressive.
“I never felt pressured to ride,” he said.  “I was in the Avon Vale pony club, did the pony club championships and just kept progressing really.  I never had fancy horses, but slightly tricky ones which we produced.
David Doel rode in his first BE competition in March 2007, when he was just 14. He left school after doing his GCSEs at 16.
He won the  Pony Trials.  Then in 2011 he was Team GB under 18 national champion,  followed by a bronze in the Team GB young rider contest in 2014.
In the ensuing eight years he moved to the senior competitions ‘which was a noticeable leap’  and starting punching his weight in 2019 to number 12 in the BE ranking and 72 in the FEI world ranking.
“We had some good results.  I’ve been very lucky,  but we have a long term plan.”
Some of that success, says David, is down to how his mum framed ‘the buzz’ or the pre competition nerves.
“Mum was fantastic when I was younger. Even when I was a child, she would say ‘can you feel that buzz?’ And then say ‘isn’t that great? That means you will do well,’
“She talks about the buzz being good.  So rather than feeling nervous as such, I now always have it in my mind that it is a good thing, and a positive force.  Some people see being nervous or edgy as a bad thing, but I don’t. It’s just great and exciting.”
He does admit to having the jitters along the way - the first time he jumped at Burghley.
“It was one of those times when I actually felt sick,” he said. “I was about 20th to go and only about 5 had got round before me, which kind of made it worse!  We did make it round, and I had a plan, which went ok.  But that was one of the only times I have felt a bit sick before going cross country!”
He does his cross country training at Rabson Manor, near Marlborough, Larkhill and Boomerang.
His yard team are there for him too at a yard which seems to put planning and a family atmosphere first.
“It is like a big family here,” said David. “I live just up the road from Mum and Dad, and we socialise a couple of times a week with the yard girls.”
“To get Galileo and myself to Badminton it is a massive process.  This all started about two years ago, to make sure he has the right qualifications for it.
“So that planning side of it was 18 months ago, and between then and now, the team starts around 7.30 in the morning through til about five,  I have a fantastic group here.  We try to have a nice time, and it is really a family yard.  We socialise two or three times together.  We have a real team ethic here.
Vet Peter Milligan and farrier Gary Urch are also nearby. “Gary has shod for my mum, and has been with us for about 35 years now. So we have a very consistent group of people to look after the horses.
Kelly Davies runs his yard and has previously worked for Steph Thompson and Zara Phillips.
“It is good little team here, and it’s really exciting to be going to Badminton. The whole team gets behind David.”
Voltaire provides David with saddles.  Kate Negus does his bridles and leather work and Gain supplies the feed.
David is already working on his plan beyond Badminton. But says that in the end it’s really the horses that determine what the plan will be.